Clitrofa to fulfill its mission, is committed to assume the quality as a goal, always present in all the developed activities, particularly those relating to the client, direct and indirect, and the service being provided.

For this, the development of their activities, have regard the following guiding principles:

What is a consumer conflict?

A consumer conflict is the result of a legal relationship of consumption, always having as a consumer and a professional (although, on each side, several consumers or professionals may be involved). Business between individuals and businesses among professionals are not consumer.

It is also important to limit consumer disputes to the situations in which the complaint is presented by the consumer. If the consumer does not fulfill the contract, namely not paying the price of the goods or the service, we are not facing a conflict that can be qualified as consumer conflict. This is because the raison d’être of the characterization of a conflict as of consumption is in the specific (most debilitating) position in which the consumer normally finds himself. 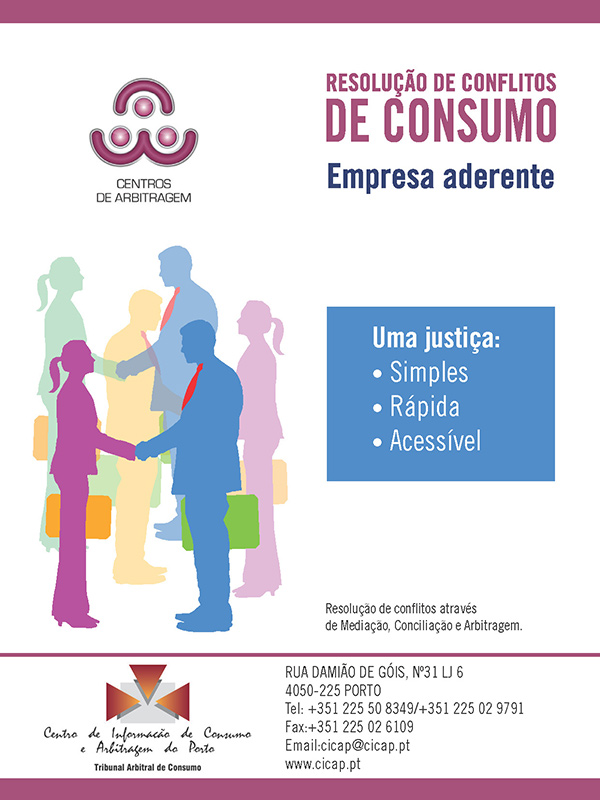 What should the consumer do to try to resolve the conflict?

In the first instance, the best way to resolve any conflict is through direct negotiation with the other party. In the case of a consumer dispute, the consumer should contact the trader, preferably by means of subsequent proof (eg registered letter with acknowledgment of receipt), informing him of the existence of a problem and requesting an answer .

In the event of a conflict, the consumer should, at a later time, resort to a means of alternative dispute resolution (mediation or arbitration) by contacting an entity that promotes its settlement.

You can consult the list of Autonomous Consumer Information Centers and Consumer Conflict Arbitration Centers, and the CNIACC only has jurisdiction when there is no other competent authority. The rules and principles governing the operation of the arbitration centers are provided for in Law no. 144/2015 of 8 September. There is also a list of Alternative Dispute Resolution Bodies existing in the different Member States of the European Union, drawn up by the European Commission.

What are the advantages of alternative means of resolving consumer disputes?

• Speed;
• Free trend;
• Participation of the parties in the resolution of the conflict.

In case the mediation is not effective for the resolution of the conflict and / or the arbitration is not viable the consumer can always resort to the judicial process.

Before the judicial courts, there are in some Portuguese counties the peace judges, who seek the resolution of litigation with procedures guided by principles of procedural simplification, orality and informality. In case there is no peace judgment, it is necessary to have recourse to a court of law, and the consumer must contact a lawyer.